In praise of Plex

Plex is nowhere nearly as widely-known as it should be. If any of the following applies to you, you should check it out: Your DVD library is huge and taking up too much space Your kids have a habit of wrecking their favourite DVDs You want to be able to watch your films or TV…

Plex is nowhere nearly as widely-known as it should be. If any of the following applies to you, you should check it out:

Plex is server software which runs on a computer in your house. It reads your media files – movies, DVD rips, home videos, MP3 collections – and indexes them all. As it identifies your files, it downloads the description and cover images (as in the example above) without you having to do anything. Then you can stream that video or audio to any device you like, anywhere in the world, converting the video format on the fly to one which that device will support.

This is a miracle. To get it set up you need a spare computer (Mac, Windows, Linux, doesn’t matter what it’s running) and all of your media files in one place (a big external hard drive, for example). I use an old Mac Mini which I bought from Jon Watts (blog | twitter) for £100 several years ago, but any computer less than 6 or 7 years old should do. Here’s my rather messy setup: 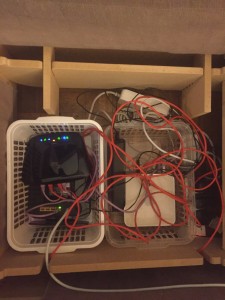 (Cable Modem and Wireless Router running dd-wrt on the left, Mac Mini and external hard drive on the right. This is under my sofa.)

Getting it set up is easy-peasy. Download the software. Install it. Configure it to search your media folders (I have five sections corresponding to five folders: Adults’ Movies (behave!), Adults’ TV Shows, Kids’ Movies, Kids’ TV Shows, Music).

Sorting out playback isn’t too difficult, either.

If you don’t have any of the above plugged directly into your TV, there are several options. The Chromecast (£30) plugs straight into the HDMI socket on your telly, and can be streamed to using your phone or web browser. Roku devices (from £40) do something similar, but don’t require a phone or tablet to use them. If you’re happier to hack, you can also use a Raspberry Pi to be a Plex Client using RasPlex.

But as I already had a couple, my setup is based around the AppleTV v2.

When I first started using Plex, the only options were to jailbreak the ATV or to use AirPlay. The former requires some technical nous and prevents you from accepting the official Apple updates. The latter absolutely hammers your wifi (streaming HD to your phone/tablet and then back to your ATV isn’t great) – and also means you can’t fiddle with your phone while watching the TV.

Enter PlexConnect. This is a frankly ingenious hack. You run a python script on your Plex server. You point the DNS server settings for the ATV to the Plex server. The Plex server passes through all DNS requests transparently, except for requests to trailer.apple.com which it grabs for itself. It intercepts web requests from the ATV, and sends back its own content. Instead of Apple’s movie trailers, PlexConnect tunnels its way onto your un-jailbroken AppleTV and delivers a pretty slick experience. The install guide is pretty good – if you can find your way around the command line you should be up and running in a few minutes.

This covers the basics but there are some more advanced Plex features which might interest you. There are a number of “channels”, allowing you to view youtube, vimeo, TED talks etc. – but in my experience, there are better ways of watching this kind of content than via Plex. There’s also a premium tier – Plex Pass – which gives first access to new versions of the software, and also allows you to save content for offline viewing on a phone or tablet.

The final feature I wanted to mention is MyPlex. Creating an account with Plex and then signing in the server and any client devices means that you can stream your media to anywhere you can get a network connection – work, hotel rooms, even on 3G or 4G. This will chew up a lot of bandwidth so be careful with any limits for mobile data plans, hotel network charges or your home broadband connection. But it’s a brilliant way of getting stuff to watch when you’re travelling, or need to entertain the kids when you’re away. And because it’s all streamed from the one server, if you pause watching at home, it’ll pick up from where you left off when you’re out on the road. Very cool.

Does Plex use it’s own streaming format or is it compatible with open/commonly used standards?

In client-server mode the plex client will attempt to negotiate with the server to supply the most appropriate format of stream, balancing bandwidth and codec availability on the client with the overhead of transcoding on the server. There’s a web client, too. Apparently, plex can offer a DLNA service (https://support.plex.tv/hc/en-us/articles/200350536-DLNA) which I guess is the closest there is to a commonly used standard, but I’ve not tried this as the UX of the dedicated clients is so much higher.

Another cheap option on the client side is RasPlex (http://www.rasplex.com/). As the name suggests, its a port of the Plex Home Theater client that runs on a Raspberry Pi. This is the client we use in our living room, and it works brilliantly. Don’t be put off by the pre v1 version number either – it tracks the latest releases of PHT pretty closely.

Thanks Ben – I’ll update the body of the article – looks pretty good!